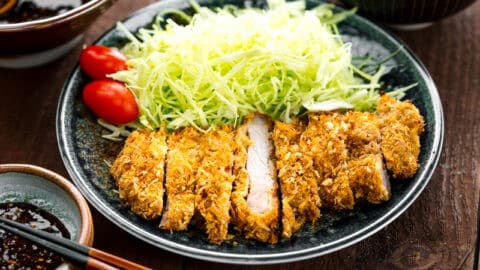 Maangchi
Today I’m going to introduce you to the Korean way of making a pork cutlet, called “donkkaseu” in Korean. It’s an iteration of the Japanese tonkatsu which was the Japanese take on the European schnitzel. It’s a hot, savory, breaded pork cutlet, and my version is served on a bed of rice and Hi-Rice sauce, with a side of kimchi and a side of cabbage salad. These days donkkaseu is sold everywhere, in all kinds of restaurants, but when I was young it was only served in Western-style restaurants (called Gyoungyang-sik). That kind of food was new and exciting and they sold hamburger steaks, beef cutlets, pork cutlets, omelette rice, and steaks. It was more expensive than Korean restaurants, but it wasn’t totally a Western either: every dish was served with kimchi and rice, and usually a pickle, too. These days Western food is all over Korea, but in those days eating Western-style food with a knife and fork was an exotic thing to do. My friends would say: “Are you ready to use a knife and fork today?” We all knew what that meant! Donkkaseu! We thought it was so cool! The Hi-rice sauce I use goes perfectly with donkkaseu but if you can’t find it, you can use regular gravy, or even ketchup. Using Hi-rice sauce for this is my invention, but it really tastes like the donkkaseu gravy I used to have in those Gyoungyang-sik places all those years ago. The minute I tasted it, I was brought back to my old middle school days and my old friends in the restaurant! Someday I’ll make a hi-rice recipe for my website and show you how this gravy is usually used, but in the meantime you can use it to make donkkaseu. The word “donkkaseu” is an odd word, and I never knew what it meant until I started learning English. “Don” is based on the Chinese character for pork, and “kkaseu” is taken from the Japanese “katsu” which is their loanword for “cutlet.” The Japanese version of this dish is called “Tonkatsu” and donkkaseu is our Koreanization of that. It sounds kind of funny!
5 from 1 vote
Print Recipe Pin Recipe Add to Collection Go to Collections
Total Time 1 hr
Course Main Dish
Cuisine German, Japanese, Korean, Pork
Servings 4 Servings

Put it together and serve: