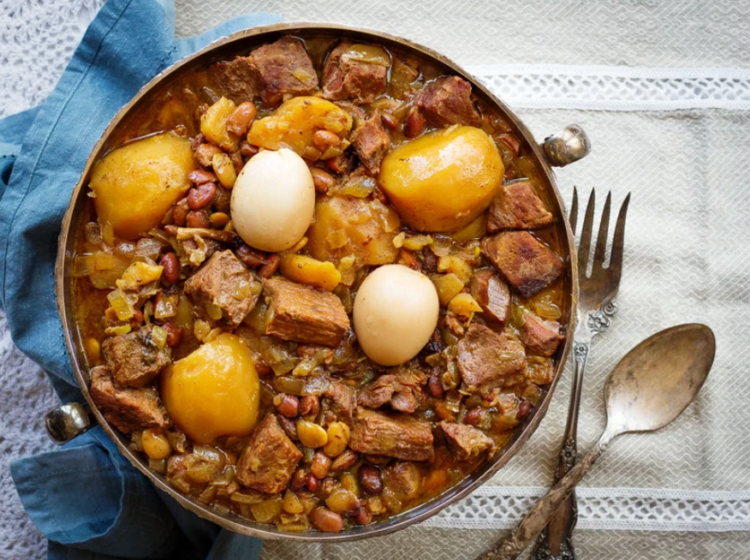 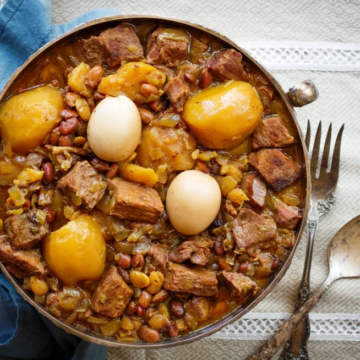 Mike Nadelman
Cholent is a traditional Jewish stew. It is usually simmered overnight for 12 hours or more, and eaten for lunch on Shabbat (the Sabbath). Cholent was developed over the centuries to conform with Jewish laws that prohibit cooking on the Sabbath. The pot is brought to a boil on Friday before the Sabbath begins, and kept on a blech or hotplate, or left in a slow oven or electric slow cooker, until the following day. Cholent originated in ancient Judea, possibly as far back as the Second Temple period, and over the centuries various Jewish diaspora communities created their own variations of the dish. There are many variations of the dish, which is standard in both the Ashkenazi and Sephardi kitchens. The basic ingredients of cholent are meat, potatoes, beans and barley. Sephardi-style hamin often uses rice or wheat kernels and chickpeas instead of beans and barley, and chicken instead of beef. A traditional Sephardi addition is whole eggs in the shell (güevos haminados), which turn brown overnight. Slow overnight cooking allows the flavors of the various ingredients to permeate and produces the characteristic taste of cholent.
No ratings yet
Print Recipe Pin Recipe Add to Collection Go to Collections
Prep Time 20 mins
Cook Time 16 hrs
Total Time 16 mins
Course Main Dish
Cuisine Beef, Israeli, Jewish, Kosher, Sephardi, Stew
Servings 12 Servings